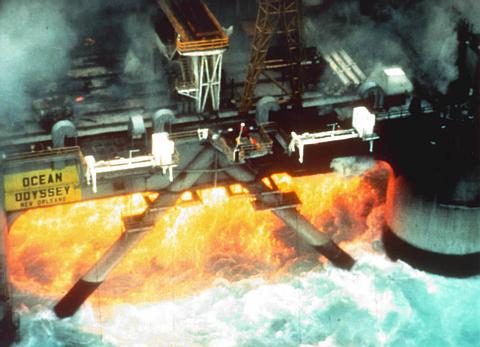 A long, dark shadow dimmed the bright hopes of the North Sea oil and gas industry after the June 1988 the Piper Alpha tragedy that killed 167. So two short months later, news of the Ocean Odyssey blowout reopened emotional wounds and increased the trepidation about the North Sea industry among the local population.

For the times, the $110-million dollar Ocean Odyssey was a state-of-the-art facility. The 390-foot (120 meter) long, 226-foot (69 meter) wide, self-propelled, semisubmersible drilling rig was classed for unrestricted worldwide ocean service. It was designed to simultaneously withstand 100-knot (190 km/h) winds, 110-foot (34 m) waves, and a 3-knot (5.6 km/h) current. The derrick was fully enclosed with a heated drill floor permitting operations down to −35 °C. And the rig had other advanced extreme-condition features—columns strengthened to withstand some ice impact, the marine riser equipped with a feature similar to a cow-catcher to keep floating ice off it. (The marine riser connects the rig to the well on the ocean bottom, through which drill pipe is passed and mud is circulated.)

Drilling mud must be circulated to return cuttings, cool the drill bit, and provide pressure to keep reservoir fluids in the reservoir during drilling. Because of a severe loss in circulation, drilling stopped on the exploratory well September 21 to try to control the problem. Early the next morning, ARCO representatives decided to pull out of the h*** to try to regain circulation, against the judgment of others on board. Newspapers reported that the Odyssey passed Department of Energy and American Bureau of Shipping inspections mere weeks before the incident. But staff “had been raising questions about the risks being taken with surges of high pressure and reports of gas leaks."

Mud and barite supplies were limited. The bit was tripped out to 13,200 feet, and the ARCO rep decided to stop and circulate.

Around noon, casing pressure rose quickly with substantial mud returns and gas vapor present at the drill floor. The circulating pressure was not great enough to prevent a gas influx and the well began to flow. The control room operator was alerted to a gas kick—an unplanned influx of reservoir fluids (oil or gas) into the well bore. The crew was ordered to lifeboat stations and to abandon. Around 1255 hours, the first explosion occurred and the four remaining crew on the drill floor evacuated to lifeboats. Around 15 minutes later, catastrophic failure of the choke hose, caused by the uncontrolled flow of aggressive fluids, led to the release of large quantities of gas; fires ignited on the rig and on the surface of the sea beneath the rig.

Fate of the Crew

At some time in the hour and a half between mustering at the lifeboats and the first explosion, the off-duty, 25-year-old radio operator was ordered to leave his lifeboat and return to the radio room to continue communications. Later, while trying to evacuate the rig, he died from the effects of smoke and fire in the pilot house. It was later reported that lifeboats were equipped with their own radio equipment, questioning the necessity of sending the operator back to the rig.

Of the 67 crew members on board, 58 were evacuated by TEMPSC (totally enclosed motor propelled survival craft) lifeboat—the first and only use of TEMPSCs for evacuation in the North Sea until April 1997. Eight crew members jumped directly into the sea after missing the launching of the lifeboats; they were picked up by fast rescue craft from the Notts Forest, the Odyssey's stand-by vessel. Crew members in the lifeboats reported waiting with the boat hatches open for the remainder of the crew until the first explosion occurred and boat launching began. Survival-suited lifeboat occupants were frantically trying to close the hatches as a wall of fire approached, and the four drill-floor crew members who had stayed behind arrived and jumped aboard through the hatches.

The direct cause of the blowout was attributed to failure of subsea wellhead equipment after many hours of kick control. The Guardian reported that it was not known whether the blowout preventer (BOP) worked or if gas fractured the choke line at another point and burst through to cause the incident. Two survivors who were in charge of submersible video cameras that inspected the state of the equipment, including the BOP, told the Guardian that “the stand-by electric motor on the hydraulic system on the rig, which powers the BOP, was known to be burnt out, and that the annular preventer inside the BOP had been damaged and was not working for two days before the blowout.” ARCO responded that the Guardian reported factual inaccuracies, stating that the pressure rating on the blowout valve was adequate for the pressure. The Observer reported in 1990 that independent tests “uncovered allegedly dangerous welding faults in a high-pressure gas line on the rig.

After the rig was moved from location and the well bridged over, a remotely operated vehicle survey was conducted that discovered:

“The death of Timothy Williams might reasonably have been prevented (i) if the Offshore Installation Manager (OIM) had not ordered him from the lifeboat to the radio room; (ii) if the OIM, having ordered Timothy Williams back to the radio room, had countermanded that order when the rig was evacuated, and taken steps to see that the countermanding order was communicated to him.”

For some years after this incident, the UK Department of Energy banned drilling in areas with anticipated reservoir pressures in excess of 10,000 psi.

The Ocean Odyssey spent several years rusting in Dundee's docks. But it has since been redeveloped as an ocean-going satellite launch pad called Sea Launch. It is based at Long Beach, California where the spacecraft are assembled before the rig is relocated to the equatorial Pacific Ocean for launch.

A better understanding of the hazard and potential accident event consequences along with testing and familiarity with the response requirements and equipment might have resulted in the radio room operator not being sent back to the radio room.

No one should still be trying to control the incident. Lifeboats then can be launched as soon as boarding is completed.

This post is from IRC's September 2009 bulletin. >>Read more
To read all of IRC's Bulletins, Practical Lessons From Major Accidents, see the Archives
Visit IRC's website for information about our hazard and risk a****sment and management services

Comment by Barone on January 18, 2011 at 10:24pm
I just have to say Dive Diva you post some really good information