Mike Brushneen, one of the British divers who died in the North Sea

The North Sea oil rush of the 1970s offered big rewards for high-risk work and claimed several lives. Now families of British workers who died in Norwegian waters want to understand what happened to their loved ones.

In the early 1970s, the North Sea was a watery Wild West.

The world's economies were being pushed towards recession by astronomical oil prices.

In the relentless pursuit of oil, untapped sources under the ocean floor became the new panacea for Western governments.

Tempted by the high rewards - some would say greed - hundreds of British deep-sea divers took part in the exploration of the North Sea oil fields in British and Norwegian territorial waters.

They were the aquatic equivalent of the prospectors who had, a century earlier, searched the deserts and canyons of North America for 'black gold'.

They are known as the pioneer divers.

But according to retired divers on both sides of the North Sea, a disproportionate number of British divers perished in Norwegian hands because safety was routinely and knowingly compromised in the interests of profits.

On one side, the widows and families of the dead divers speak of conditions that would have caused the most hardened of cowboys to choke.

The Norwegian government, they argue, bears ultimate responsibility because it turned a blind eye to hazardous diving, and in some cases, knowingly approved of illegal working practices.

In short, they say their loved ones were treated as human guinea pigs.

On the other side, the Norwegian government, oil producers and diving companies deny any wrongdoing.

Ann Marie McCreath, from Gatehouse of Fleet in Scotland, is one of those searching for answers.

Thirty-seven years ago in March, her father, Mike Brushneen, was killed in an explosion on a Norwegian diving vessel, the Ocean Viking, in the North Sea. 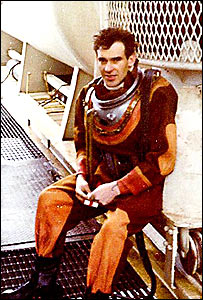 explosion on a Norwegian vessel

Ironically, he was never supposed to take part in that dive.

He had been promoted and was due to be relocated with his family to Aberdeen. But his employer was desperately close to pumping oil.

A man of Mike Brushneen's experience was required to help deal with a problem on the well heads, that was holding up production.

Ten minutes before the end of the dive, he was killed in an unexplained accident.

Within days, his widow and three children were taken from the family home in Stavanger and flown to Newcastle upon Tyne.

Since then, Mrs McCreath has heard nothing from the Norwegian government, the oil producer or the dive company that employed her father.

There was no accident report and nothing on the death certificate to explain his death.

Her efforts to seek information from the authorities have drawn a blank.

"It's all about greed," she tells the BBC. "They really needed the money. They basically used those men as pieces of equipment."

"It's been horrendous. It destroyed our family. We had very little money as we grew up. My mother lived off a widow's pension, but we got nothing from the Norwegian government."

"It's hard to believe that as recently as 25 years ago, these things were going on in civilised countries."

Mrs McCreath's father is one of 17 divers killed on the job on the Norwegian continental shelf - 12 were British and one a US citizen.

The relatives of all four Norwegian divers have been paid compensation by the government in Oslo.

By contrast, only three foreign families - two British and the American - have received a payout.

Six months ago, Ann Marie heard of Tom Wingen by chance when she entered her father's name in an internet search engine.

Mr Wingen is a spokesman for the Norwegian North Sea Divers Alliance NSDA and has been instrumental in bringing a class-action law suit against the Norwegian government.

He's one of 24 retired Norwegian pioneer divers who have gone to court to seek redress.

Collectively, they argue that they should be compensated for loss of earnings because of their work-related injuries. They say they contributed to Norway's economic transformation.

"I'm seeking recognition", Mr Wingen says. "Not just for Norwegians, but for the British too."

The Norwegian government has already paid compensation to 123 disabled divers.

It has admitted it has a "moral and political" duty to pay for their injuries, but has not acknowledged any legal responsibility.

Observers say it is reluctant to do so, in case it opens the floodgates to hundreds of new claims.

Neither the Norwegian government nor the state-run oil regulator, the Norwegian Petroleum Directorate, nor the main diving companies will comment on the men's families' allegations while the class-action law suit is ongoing.

“ These guys had no respect for human life; they were motivated by greed ”
Clare Lucas
Daughter of diver, Roy Lucas

Clare Lucas from Sheffield says it has been too easy for those responsible to avoid blame.

Ms Lucas lost her father, Roy, in 1983 in an explosion on a Norwegian semi-submersible oil rig, the Byford Dolphin.

Five people were killed in the accident. 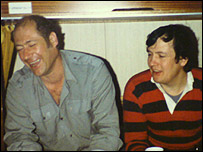 She accuses the Norwegian government of turning a blind eye to poor safety standards.

"So many people have been killed and they got away with it," she says. "These guys had no respect for human life; they were motivated by greed."

“ The state admits a responsibility on the basis of moral and political aspects, but does not acknowledge any legal liability. ”
Norwegian labour ministry statement

"My mum got no financial help for me and my brother and sister from the Norwegian government."

At the time, another diver, Billy Crammond, was blamed for causing the Byford Dolphin explosion, in which he too was killed.

The shame drove Mr Crammond's widow, Ruth, to move away from her native Scotland.

It was only recently that she was given an alternative explanation for her husband's death through Tom Wingen's organisation, the NSDA.

"Just six weeks ago, I found out that if a certain bit of equipment had been installed the accident would never have happened," she says.

"I felt ashamed, I felt that people were crossing the road so they didn't have to talk to me, so I moved to England.

"I am very angry and I am looking for someone to come to me and say 'we are very sorry for what we have put you through for 25 years'.

"Yes, they are talking about compensation and yes, it would help. But the most important thing to me is justice and the truth. All they wanted was the oil and the money."

Ruth has since moved back to Fife.

Billy Crammond's daughter, Linda, adds: "I am very angry because I have now heard that if they had only spent £10 [on equipment], my dad and other dads would be alive today."

The NSDA says poor record-keeping and deliberate stone-walling by the authorities are making it difficult for foreign divers and their families to pursue their claims.

Mr Wingen has heard from scores of Britons expressing an interest in joining the class-action lawsuit. At least 250 people - 150 Norwegians and 100 foreigners - have come forward.

Ann Marie McCreath says the more she learns about the dangers of deep sea diving, the more determined she is to fight.

"The North Sea is now one of safest places to dive," she says, "partly thanks to the trade unions."

"But these horror stories are still going on in the Gulf of Mexico", Ann Marie concludes. "They don't have any safety procedures and there are Americans dying there every month."

Comment by John Joly on May 7, 2010 at 8:53am
I dived the North Sea for most of the 70s. There certainly were infractions of established safety procedures then and men died because of that. Others died because they were not experienced enough to undertake some tasks assigned. Such inexperienced divers were used, as are some to this day, because the job takes priority and the contractors won't turn down work due to the unavailabilty of experienced divers. Diving schools, like most educators, teach the basics of an endeavor. Doctors, lawyers and engineers all learn a lot "on the job". Divers must also learn in the field and if they are pressed into service where they are not trained, it increases the already considerable dangers of the sea.

While the lady's statement that divers are dying in the GOM every month is inaccurate, there is a need for stricter regs. ADCI is working at that and most diving companies cooperate and contribute. Pay for divers has not kept pace with inflation. Only those who can stay with a company long enough to build a retirement with a group plan or through wise saving & investing personally will be fiscally prepared for old age. Many divers have gotten out of the business because of that. Some of those men would have been true assets to the profession.
I have had a number of friends and coworkers killed in the water - most could have been spared. Attempts at unionising divers have failed. Divers often move from company to company to better the chance of paying their bills. The UK unions have helped somewhat, but my impression is that most UK divers are still scrambling around the world to get employment and often in less- than- safe circ**stances.
I have been in touch with Tom Wingen - he has worked HARD to settle the appeal to the Norwegian authorities. It is a just cause. The future must include many changes or the overall circ**stance will remain the same. Under-trained men doing extremely dangerous work will always result in tragedies - only the frequency and intensity will be unpredictable.
My condolences are sincere to the survivors of lost divers. All in the diving industry should be working toward minimising such tragedies.
To newbies = Learn all you can on every job and do not push to undertake a procedure you are not very familiar with, especially if you are diving deep air, gas or saturation. Problems are exacerbated by depth and you may not have time to figure out how to save yourself.
I have survived an explosive decompression and had other close calls. I am surely grateful to the men who taught me to be prepared.
Good life - dive safely.